The 7 Greatest Risks to Your Puppy’s Health

When you bring that new puppy home for the first time, he has a whole new world to learn about….and that inquisitiveness doesn’t stop after the first day, or week, or month. A puppy’s natural need to explore means he’s going to investigate things with his mouth and sniff where he shouldn’t. Unfortunately, this learning curve also involves risk, be it sniffing infected feces or chewing a toy.

Combine this curiosity with an immature immune system and it means your puppy is more prone to certain health issues than an adult dog. So what are these problems? To help you prepare here is your guide to the seven greatest risks in a puppy’s first 12 months: 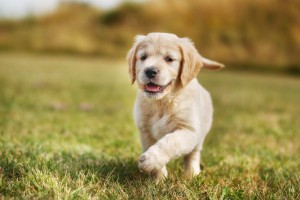 1: Change of Diet
You collected your puppy from the breeder and brought him home. He’s left his mother and siblings, everything looks, smells, and sounds strange…including the food.
A sudden change of diet, such as giving a different diet to the breeder, is a common cause of puppy diarrhea. More than just being about stress, the change doesn’t give the gut bacteria time to adapt to the new food, which results in poor digestion and diarrhea.
If this happens, and your puppy is bright and well, he’s eating and not vomiting, then putting him back on familiar food may do the trick. Failing this, if the breeder is miles away and you can’t source the food, collect a prescription diet from your veterinarian, designed to settle upset tummies. Or a short term alternative is to feed a bland diet made up of white meat and rice.
However, if the tummy upset persists for more than 24 hours, or puppy seems sleepy or otherwise unwell, contact your veterinarian immediately.

2: Giardia
A group of dogs kept together, such as at a breeding kennel or rescue center, are perfectly placed to pass parasites between them. One such bug that is commonly found in puppies is Giardia. This is a single-celled organism called a protozoon, which causes ultra-smelly, cowpat like diarrhea.
If your puppy’s tummy upset persists for more than 24 hours, then giardia could be the explanation. Get your pup checked by a veterinarian, and to speed up diagnosis take a fecal sample along in a sealed pot. Although puppies with giardia fail to thrive, lose weight, and lack energy, the condition is not usually life-threatening–unlike the next condition on our list.

3: Parvovirus
One of the worrying things about parvovirus is even a puppy kept indoors is at risk. This is because the virus is very tough (it can survive steam cleaning) and persists for months in the environment. If someone happens to walk on contaminated ground, then infection can be walked into the home on shoes.
The symptoms of parvovirus include bloody sickness and diarrhea, with a distressingly rapid deterioration. A puppy’s weak immune system is no match for parvovirus, so make no mistake; your puppy needs to see a vet and fast. However, far preferable to treating a sick puppy is to prevent infection in the first place, with a course of vaccinations.

4: Distemper
Distemper is another viral infection and causes debilitating lung infections and a thick tacky discharge that gums up eyes and blocks the nose. The dog is feverish and also develops sickness and diarrhea. However, distemper has a wicked sting in the tail because even if the puppy recovers from this stage, he may be left with brain damage which causes seizures later in life.
Distemper is another example of diseases such as Parvovirus, Adenovirus, Parainfluenza virus, and Leptospirosis that you can protect your puppy against by getting him vaccinated. 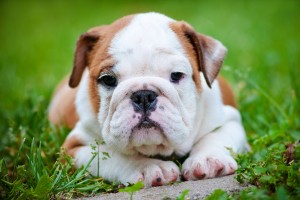 : Roundworms
While still in the womb all puppies are infected with roundworm eggs which cross the mother’s placenta. These eggs encyst in the puppy’s body and hatch out over his lifetime, and especially rapidly during his first six months. A single deworming treatment just isn’t enough, and regular doses must be given if the puppy is to stay in the best of health.
If you can feel your puppy’s ribs and backbone, and yet he has a big pot belly, the chances are he has worms. And don’t be misled. Contrary to popular belief, a wormy puppy won’t be ravenously hungry–in fact he’ll have a poor appetite because of worms filling his stomach!

6: Puppy Strangles and Acne
These are two similar, but subtly different conditions. Both affect youngsters under 12 months of age and are variously associated with facial swelling, fever, spots, and oozing, infected skin.
Short-haired breeds are most at risk, and untreated the puppy can be left with disfiguring facial scars. However, early treatment by your veterinarian is usually curative, and prompt presentation can save a puppy from much unnecessary discomfort.

7: Chewing
Puppies love to chew, which in some cases can be a life-threatening habit. If a puppy bites down on electrical cables, at best he may sustain burns to the mouth, and at worst electrocution and death.
Chewing a toy or any indigestible item, and then swallowing it can lead to bowel obstruction. The first sign is vomiting, but damage to the bowel leads to collapse, and can be life-threatening with high-risk surgery necessary to repair the damage. Where possible, protect your puppy from himself and keep chewing hazards out of his reach.
A puppy’s well-being isn’t just about good health. Every bit as important is proper socialisation–if the puppy isn’t exposed to different people, sights, and sounds, in his first 18 weeks, he may grow into an anxious, fearful dog. This has huge implications for his future quality of life…so get puppy vaccinated, and out and about as soon as possible.