French Bulldog Heritage
In 2013, the American Kennel Club ranked the French Bulldog as the 11th most popular breed in the USA. Despite what the name suggests, the Frenchie’s origins lie in England. The early history of the breed is somewhat vague, but it’s believed that lace workers from the England fled to France in search of work taking their toy sized English Bulldogs with them. These small examples of Bulldogs had often worked as ratters but soon found a new role as companions for “ladies of the night”, spending their time escorting the women through the streets of Paris. The breed’s fans soon expanded to include artists and royalty. How the breed was developed to create the modern Frenchie look is unknown but suggestions include crossbreeding with Pugs and Terriers.

French Bulldogs in the USA
French Bulldogs were making their way to the USA in the later half of the 19th century, but breeding programs weren’t created until 1885. At this time, the trademark bat ears were not standardized among the breed, and some dogs still had the rose type ears traditionally found in English Bulldogs. However, at the New York dog show of 1896, the best in show prize was awarded to a rose-eared dog. This upset many of the owners and spurred them to form the French Bull Dog Club of America and in turn the breed standards that state that only bat type ears are acceptable. 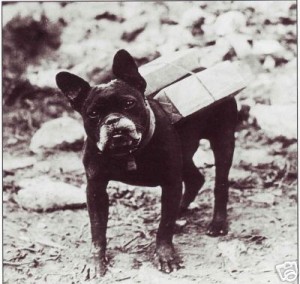 • It was a French Bulldog named Mutt that famously worked as a YMCA carrier dog in the trenches of World War 1 supplying the troops with cigarettes and companionship. Although wounded twice,Mutt made his way safely back home after the war.

• There was a champion French Bull Dog called Gamin de Pycombe on board the Titanic. His owner had just purchased him in England for $230, almost $20,000 in today’s money.

Modern Frenchies
Modern French Bulldogs are snugglers who seek companionship and affection. With their cute snorts and snores, (in addition to their digestive problems!) they can be a constant source of entertainment. And unlike many other bulldog breeds they love to chase balls and play the role of loveable rogue.

French Bulldog Health
French Bulldogs, like all purebred dogs, can suffer from a number of health problems. For this breed in particular it’s incredibly important for owners to find a vet who is used to working with the breed and who is aware of their issues with anesthesia. To help owners keep their dogs healthy and happy, we’ve created a list of the most common illnesses seen in French Bulldogs: 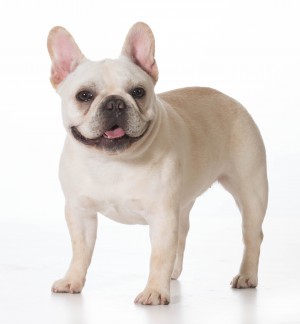 rachycephalic Syndrome – Is caused by a set of anatomical anomalies that lead to respiratory distress when the dog exercises or gets hot. These anomalies make it difficult for the dog to get enough oxygen and can cause increased heart rate. The situation can be very serious, and some Frenchies need surgery to correct the abnormalities.

Elongated Soft Palate – The snorting and snoring of the French Bulldog is caused by their soft palate being too long for their mouths. The excess tissue blocks the airway and impedes the dog’s ability to breath, especially during exercise. In some cases, the cartilage supporting the airways weakens and needs to be reconstructed with surgery.

Cherry Eye – Dogs have three eyelids to provide their eyes with added protection. Sometimes the tear gland in the third eyelid slips out of place and bulges out, this is known as cherry eye. Sometimes it’s possible for the gland to correct itself but it frequently requires surgical intervention.

Heat Stroke – Frenchie’s struggle to regulate their body temperature due to their squashed faces making heat release through panting difficult. French Bulldogs shouldn’t be walked in high temperatures and need help to keep cool on warm days. Heat stroke can strike quickly and can lead to a number of complications including death.

Intervertebral Disc Disease – When the cushions between the discs bulge or burst causing pressure on the spinal cord, this leads to pain, lameness and even paralysis. Treatment ranges from drug therapy through to surgery.

Skin and Ear Issues – French Bulldogs are prone to skin and ear issues both because of their body type and their susceptibility to allergies. Regular bathing and ear care can help with some skin conditions, but many require long-term drug therapy.

Patellar Luxation – Frenchies are prone to problems with their kneecaps. A luxating patella is where the kneecap fails to stay in the correct position and inhibits your dog’s movement. If the luxating patella is considered a problem to your dog’s daily life then treatment will likely involve surgery. Untreated luxating patellae can cause further damage to the surrounding tissue, including the cranial cruciate ligament if left untreated.

Entropion – Is when a part of the eyelid inverts inwards. The hairs and eyelashes cause irritation to the eyeball and can lead to a number of complications including corneal ulcers. Treatment involves surgery to correct the condition.

Hip Dysplasia – A genetic condition that causes the hip joint to form abnormally. The abnormal joint is unable to function correctly and causes pain and lameness. Treatment varies depending on the severity of the malformation and symptoms, but will likely involve surgery in more severe cases.

Do French Bulldogs Need Insurance?
With their predisposition to a great number of medical conditions, many of which cost thousands of dollars to treat, insuring your French Bulldog can provide the peace of mind in knowing that you’ll be able to afford the best possible care for your dog should the need arise. It’s a security blanket that lets you enjoy the precious moments with your pet without worrying about the vet bills.
Insurance plans for French Bulldogs are surprisingly affordable considered that they are a high-risk breed to cover. The high incidence of illness combined with the expensive treatment costs means that coverage is a worthwhile expense especially when you consider the cost of the veterinary care your Frenchie may need. The best thing about modern pet insurance policies is their flexibility–they allow you to adjust coverage levels, deductibles and co-pays so you can create a policy that fits your budget and your needs. We’ve gathered a selection of quotes to give you an idea of how much health insurance for French Bulldogs can cost: 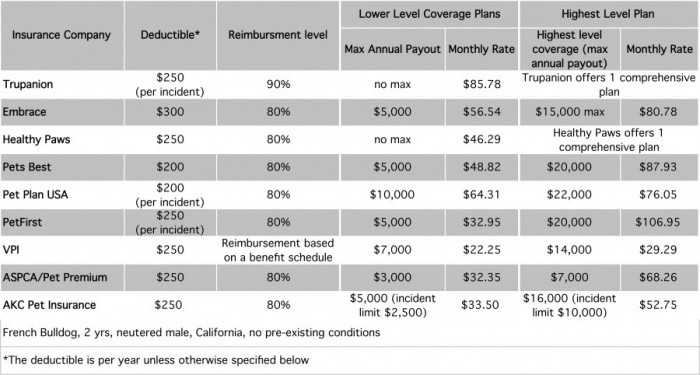 You can get tailored quotes for your pet by filling in the form at the top of the page. Quotes are free and easy to request, allowing you to get the information you need to decide if insurance is right for you and your pet.