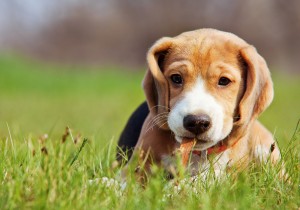 Beagles are one of the most popular breeds of dog in the United States and Miss P’s recent win at the Westminster dog show can only help the breed rise up the popularity rankings. But this modern Beagle barely resembles the hunting dogs Beagles are thought to have descended from. There are records of Talbot Hounds, one of the breeds thought to be part of early Beagle breeding lines, being brought to England by William the Conqueror. These Talbot Hounds were tall and slow, very unlike the modern Beagle we know today. In fact, the earliest dogs referred to as Beagles were under 9 inches tall!

Glove Beagles.
Glove Beagles, named this because they were small enough to fit in your hand, became popular with English royalty in the 12th century and maintained their presence in royal households until the 15th century. How these pocket-sized Beagles were created is the subject of much debate and very few provable stories. These miniature Beagles faded in popularity as larger hunting dogs took over their role in hunts. Beagle numbers dwindled, but dedicated owners eventually standardized the breed to be closer to 15 inches, a much more practical size for a working dog.

Are Tiny Beagles Still Available?
As sad as it “teacup” Beagles no longer exist. It would be incredibly cute to see a Beagle of this size, but the breed lineage had become extinct by the early 20th century. Any breeder claiming to be selling teacup, miniature, or glove Beagles should be avoided at all costs. Small size can often indicate a serious medical problem or a non-purebred dog.

Modern Beagle Jobs
Beagles have adapted to modern life by taking on new roles. The Department of Homeland Security even has it’s own Beagle Brigade, which it uses to hunt out agricultural products illegally brought into the country. They chose Beagles for their incredible sense of smell—they have 220 million scent receptors compared to a human’s 5 million—and loveable, non-intimidating nature. They’re the friendly dog-faces protecting America’s agriculture!
Beagles also make excellent assistance dogs. In fact, it was a Beagle named Belle that was the first ever canine recipient of the Vita Wireless Samaritan Award. Belle was a diabetic alert dog that saved her owner’s life by alerting him to his dangerously low blood sugar and then using her teeth to make his cell phone dial 911. Now that’s a talented dog! 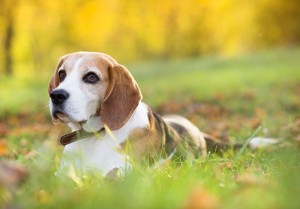 Do Beagles Make Good Pets?
Beagles make incredible pets, they are small enough to live in apartments and have a loving nature that makes a great addition to any active family. They do require exercise and stimulation to keep them from getting bored as bored Beagles have a tendency to howl. A trait that’s likely not going to be appreciated by any close neighbors! If you’re looking for an intelligent, loyal and friendly exercise buddy, then a Beagle is the dog for you.

Are Beagles Healthy?
Beagles are a strong breed of dog that on average live 12 – 15 years. However, like any purebred dog, they have a much higher risk of developing a number of health problems. The key to keeping your Beagle healthy is to be aware of common conditions and to know what to look out for. Here’s a list of the most common illnesses seen in Beagles:

Intervertebral Disc Disease – This is a painful condition where the cushions between the disks bulge causing pressure on the spinal cord. It causes lameness and can even lead to paralysis. Treatment depends on the severity of the condition but ranges from drug therapy to surgery.

Hip Dysplasia – Is a genetic problem that causes the hip joint to form abnormally, the problem can often go unnoticed until a dog gets older. The poor functioning joint can cause pain and movement problems for the Beagle. Treatments are decided based on the severity and can include physical therapy and surgery.

Hypothyroidism – causes insufficient thyroid hormones to circulate throughout the Beagles body. This leads to fatigue, weight gain, hair loss and a myriad of other symptoms. It is treated with drug therapy for the entire duration of your pet’s life.

Cherry Eye – To give their eyes increased protection dogs have three eyelids. Cherry eye occurs when the tear gland in the third eyelid slips out of place and bulges out. This condition sometimes corrects itself but often requires surgical intervention.

Progressive Retinal Atrophy – Can be used to describe many causes of degeneration of the retina. The degeneration can lead to vision loss and eventually blindness. Unfortunately, there is no treatment but blind dogs can lead full and active lives. 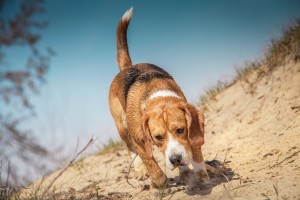 Epilepsy – This brain condition can vary greatly in severity and treatment depends on the frequency and intensity of seizures. It is often treated with medication and dogs with well-monitored epilepsy can lead long and healthy lives.

Patellar Luxation – Beagles are prone to problems with their kneecaps. A luxating patella is where the kneecap fails to stay in the correct position and inhibits your dog’s movement. If the luxating patella is considered a problem to your dog’s daily life then treatment will likely involve surgery. Untreated luxating patellae can cause further damage to the surrounding tissue, including the cranial cruciate ligament, if left untreated.

Obesity – Beagles were bred to be hunters. It’s important to give them plenty of exercise to prevent them from becoming obese as obesity can lead to many other serious health conditions including diabetes.

Cancer – Beagles are known to be susceptible to various forms of the disease. Fortunately, it is no longer the death sentence that it once was as treatments continue to advance. The downside to these new treatments is that they are often very expensive to treat.

Ear Infections – Their adorable long ears can create a perfect environment for ear infections. Antibiotics might be required to prevent the condition from becoming more serious and causing long-term problems.

Pet Insurance for Beagles
With their strong desire to follow their nose without regard for their own safety and their genetic predisposition to a number of medical conditions, insuring your Beagle can provide the peace of mind in knowing that you could pay a veterinary bill that could reach into the thousands of dollars. It’s the umbrella needed to help you provide the best possible treatment for your pet should they get sick, letting you enjoy a lifetime of precious moments with your dog. The great news is that Pet Insurance has evolved and now allows pet owners to customize coverage and create a plan that meets their monthly budget. We’ve gathered a selection of quotes to give you an idea of how much health insurance for Beagles can cost. We recommend that you pay attention to the deductibles and reimbursement levels. Some plans pay out a yearly maximum, and some pay out a maximum per incident.

For unbiased advice on Beagle Pet Insurance visit Pet-Insurance.org. Quotes are free and easy to request, allowing you to get the information you need to find a plan that fits your needs and budget.